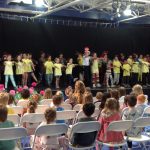 Dress Rehearsal for the school 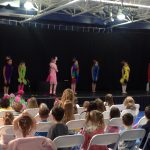 It looks already so good! 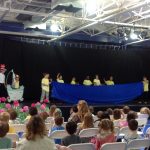 We are swimming in the water 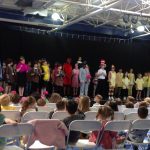 All on deck singing… 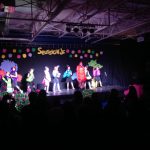 “Let’s talk about me” 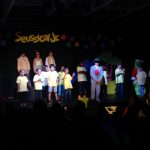 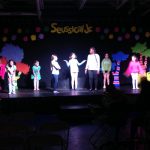 I love to sing with my friends… 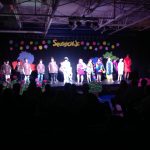 Every scene was a fabulous one!

All elementary students were in the school play, Seussical Junior, the musical based on the works of Dr. Seuss. Most people are familiar with the books of Dr. Seuss and enjoy not only the rhyming style of his works but the creativity of his stories. Among the many benefits to be in school play, one of them is that the students get to become part of a larger system working toward a common goal. It has been the culmination of weeks of practice, so the performance itself became a huge reward for all the hard work. Every single participating student did an amazing job!!

This musical weaves together many of his stories and brings a variety of his characters to life. “The themes in ‘Seussical’ are the importance of honesty, loyalty and friendship. But ‘Seussical’ brings additional messages that are so important to people of all ages.

In the play, the colorful bird Gertrude McFuzz is a friend to Horton the Elephant. However, she is unhappy with her one-feather tail. The story-line surrounding Gertrude touches on the difficulties people have with self-image and outward appearance. Horton, meanwhile, has to withstand peer pressure and being laughed at as he tries to save the Whos. While he is being chided as “the biggest blame fool in the Jungle of Nool,” Horton stands firm on principal and does what he knows is right, profoundly singing, “A person’s a person no matter how small.”

Underscoring the story is the relationship between Horton and the smallest Who in Whoville, Jojo. Jojo is a “thinker of great thinks” which unfortunately gets her into trouble. As she is sent off to learn discipline, she feels all alone. Similarly, because Horton is the only one who can hear the Whos, he laments the fact that no one is able to understand him. The result is a bond between Horton and Jojo and the duet “Alone in the Universe.”

Through much mayhem, Horton retains the ability to believe in himself. Even facing the possibility of jail, Horton states, “I meant what I said and I said what I meant. An elephant is faithful one hundred per cent.” Mayzie LaBird and Sour Kangaroo provide examples of the issues of right and wrong, and the Cat in the Hat reminds the characters facing difficulty to consider “How Lucky You Are.”

BRAVO to all our performers!!